The Coolatta Wasn't That Cool 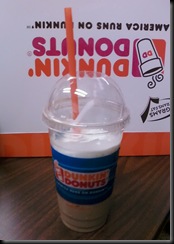 So I finally had the chance to try the Coolata out.  It was actually an interesting mixture for a blended coffee drink.  The way that it was made is similar to that of a milk shake but the base was more of a creamy ice.  The dispenser was like a soft serve ice cream except it was mostly ice crystals like a slush in creamy liquid form.  The process was to grab a plastic cup and fill the bottom with some coffee and then dispense the icy soft serve into it.  Then they blended the mixture with a mixer that looks like a Dairy Queen Blizzard mixer.  Now on to the flavor.  It sucks.  It's combination of flavors are lacking in all aspect.  It reminds me of a lame duck.  It can't walk well, swim well, or fly well.  It does all that but sucks at everything.  The flavor of the coffee was very light.  The creaminess was cut by the ice particles.  It tasted like a half cup of frozen skim milk with a half cup of ice and blended together with just two tablespoon of regular coffee.  The frozen cappuccino at QT was 50 times better.  So far, in my search for the alternative to the Coffee Frappuccino, I have not found one that was as bad as the Coolatta.  Ok, ok, maybe the MacDonald's ice coffee was just as bad.

Popular posts from this blog

April 10, 2015
It's been 7  years since I last posted here!  And it's taken that long for me to finally found something that is better than the Coffee Frapp.  It's our good old friend the Java Chip Frapp.  But the key factor is to use the caramel drizzle.  With that, it made the balance of sweet and bitterness into an amazing harmony.  Can't believe it took me 7 years to figure this out.
1 comment
Read more

April 29, 2008
There are several alternatives to help curb your cravings out there.  For example, QuikTrip (QT) gas station also have a Frozen Cappuccino machine.  It's only a couple of bucks so it is almost just half the price of a Starbucks Frappucino.  I really really tried to get hooked on this instead but it just was not quite there yet.  Let me see if I can describe how it tastes.  Imagine a very light coffee in the Slurpee machine with double the cream and some sugar.  It is blended to a very smooth consistency and goes down very well.  Maybe it is just too creamy and not as rich in coffee flavor as the Starbucks version but this might help others out there that may want to slowly stop their Starbucks addiction.  I view the Frozen Cappuccino from QT as a nicotine patch for cigarettes.  It didn't work for me but it might for you.  Good luck...
2 comments
Read more